Jungle, Indonesia – January 13, 2015: A man from the Korowaya tribe with a child on his lap, sitting on the bank of the river fishing 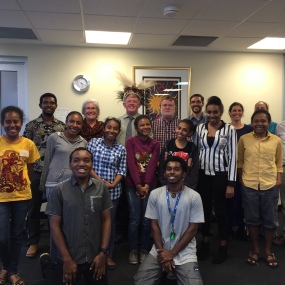 The Uniting Church in Western Australia is in partnership with Gereja Kristen Injili di Tanah Papua, to provide a cultural exchange program for Papuan students to introduce them to the Australian language and culture.

Papua and West Papua are the easternmost provinces of Indonesia. Indigenous Papuans have some of the most pressing economic and  health needs in the nation, with political turmoil in the region contributing to the extreme poverty of many Papuans and by those attempting to provide aid.

Through the partnership with GKI di Tanah Papua some avenues have been identified where real help can be provided by ordinary Australians to improve the lives of ordinary Papuans.

Uniting World works closely with the people of Papua and more information about their actions and reports on can be found on their website.